Who doesn’t love a birthday party? Most kids do, including our son, Dominic, who recently celebrated his own 7th birthday with his twin brother. But, Dominic LOVES to be invited to other parties too. He LOVES to celebrate. He LOVES pizza and cake. I mean, REALLY LOVES cake! Now, Dominic can’t jump around or bounce or play arcade games. He can’t eat pizza or cake by himself. But, he will celebrate to his heart’s content if you give him a chance.

Dominic is in a wheelchair because he doesn’t have full control of his arms and legs, or most of his body for that matter. But, he’s still a kid who loves to party and giggle and laugh alongside his friends. He might even yell out a “woo hoo!” While he cannot feed himself cake, if you give him a choice of chocolate or vanilla, he’ll make a choice. He may even ask for seconds. And if ice cream is an option, he will likely let out a big “yes please!”

Now, I didn’t always feel this way. In fact, I recall times when I wished we didn’t have to find an excuse to get out of social functions, even wishing we weren’t invited. For years, a simple visit to a party often ended in a disastrous meltdown leaving the hosts apologetic.

A year or so ago, he received an Evite for a birthday party of a young girl whose name did not ring a bell. I didn’t know how to politely decline or, even worse, reply with, “Who is this?” I contemplated sending a gift just to be courteous or letting the sender know that the invite must have been a mistake.
Fortunately, I learned that this little friend was a peer at Dominic’s school, but not a child with special needs. She was just a FRIEND — a friend in the “typical” kindergarten classroom amongst other friends, none of which had special needs. He attended and had a blast! Humbled, it caught me off-guard at how much fun he had.
Since then, invites keep pouring in. Some have ended in very quick exits and some where he cried because he didn’t want to leave. We attempt most every party from pool parties, to bowling, to more bounce houses and “pumping it up.” Like I said, things aren’t always “fun” and can end in tears. Plus, the scenario may not be ideal for a child in a wheelchair with sensory processing troubles.

But, please don’t let that stop you from inviting him or children like Dominic. Don’t burden yourself with accommodations. While we appreciate it, it’s ok to leave that to us. Further, don’t be offended if we quickly exit or never even make it out of the van if he’s just not having it. Most importantly, plan your birthday parties as you would, and celebrate your child as you should because we want to celebrate with you. After all, life is way too short to miss out on a good party! 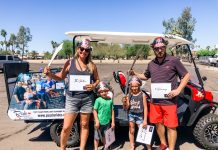 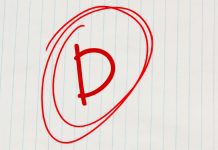 Why I’m Proud of My Child’s D: So Much More than a Grade 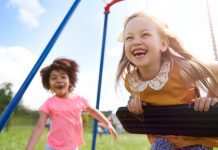 How To Teach Your Kids to be Kind at the Park

Angela Barako - June 19, 2021 0
In this series we'll tell you about the top 3 new things we're loving in AZ. Follow along this summer for new restuarants, recipies,...